Krzysztof Komendarek-Tymendorf has for many years been among the eminent polish musicians of his generation. At age seven he started playing the violin. He comes from a family with deep musical traditions and is a descendant of the eminent Polish composer Michal Kleofas Oginski (1765-1833).
In 2012, he graduated with honors M.A. at the Stanisław Moniuszki Academy of Music in Gdańsk in the viola class of professor Irena Albrecht. At the age of 24, he started working at Academy of Music as an assistant professor in the viola class. In July 2018 he defended his doctoral dissertation, currently he works as an assistant profesor – adjunct at Stanisław Moniuszki Academy of Music in Gdańsk. He perfected his skills in Vienna at the Universität für Musik und darstellende Kunst Wien with Prof. Wolfgang Klos and Ulrich Schönauer. He is a laureate of numerous competitions, prizes, awards and scholarships.
Since 2012 he has been a guest student of the Swedish National Orchester Academy in Göteborg. He made his debut as a soloist with a Polish Chamber Philharmonic Orchestra Sopot and as a chamber musician with famous polish oboist Tytus Wojnowicz in Tadeusz Baird Zielona Góra Philharmonic. 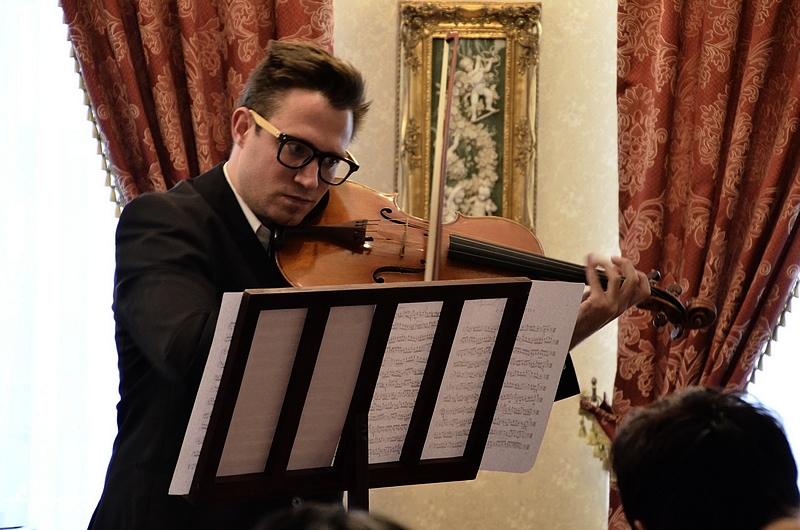 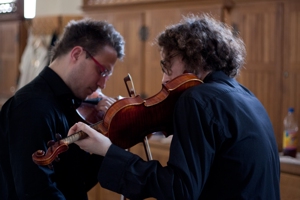 He has performed in many ensembles and orchestras in the most prestigious European halls, including Germany (Berliner Philharmonie, Konzerthaus Berlin, Herkulessaal in Munich), Austria (Musikverein, Wiener Konzerthaus, Musik Theater Schönbrunn), Portugal, Greece, Czech Republic (Obecní Dům) Italy, Sweden, Denmark and Poland (among others, the National Philharmonic in Warsaw, Concert Hall of the Polish Radio in Warsaw, Krakow Philharmonic, The National Forum of Music in Wroclaw, and the Baltic Philharmonic).
He is a laureate of numerous music awards. In 2006, for example, he won first place in the competition, "Macro-regional performances of young violists" in Warsaw and in 2015, as a member of Duo Del Gesù he became the winner of the international competition, The 25th Young Musician International Competition 'Città di Barletta' in Italy.
Despite his young age he has played under the baton of some of the greatest conductors such as Pierre Boulez, Krzysztof Penderecki and Jerzy Maksymiuk. He has also played alongside renowned soloists including Ivry Gitlis, Kolja Blacher, Konstanty Andrzej Kulka, Lukasz Dlugosz and Quatuor Ebène.
He has recorded for radio stations such as Deutsche Kultur Radio, Bayerischer Rundfunk, ORF Vienna Radio, Radio 1 (Poland) and television, notably TVP 1 and Telewizja Polsat.
Tymendorf is also involved in social activities. Since 2013 he is the vicepresident of the NGO Association of Artists CAPABLE OF ANYTHING. He is also the director of such nationwide events as Viva Viola Festivity, 2014-2017 - International Year of Violas Gdansk, EURO Chamber Music Festival in Gdansk (2012-2017), Lubuski Music Festival in Zielona Gora (2013-2016), Space Art Festival (2014-2015) in Warsaw, the organizer of the Baltic String Duo Competition in Gdansk (2015-2017) and the Baltic Music Workshop in Gdansk (2017). 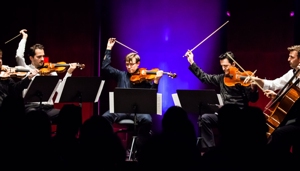 He was invited to represent the The Stanislaw Moniuszko Academy of Music in Gdansk and recitals at the 41st International Viola Congress in Cracow in 2013, the Viola Arte National Viola Conference in Gdansk, the 43rd International Viola Congress in Italy in Cremona in 2016, the Fira B! conference in Palma in Majorca in 2017, the Luxembourg Classical Meeting - Music: LX in Luxembourg and the Music Export Conference in Warsaw in 2017, Pomeranian broadening the field of culture - Conference of Researchers and Practitioners in 2017 in Gdansk. He was Member of the Polish delegation representing Poland at the POLAND booth Powered by Culture.pl at the biggest classical music fair Classical: Next in Rotterdam in 2017.
In 2012 Tymendorf received the Gdansk Cultural Scholarship, and in 2014 he was nominated for the most prestigious award in the field of culture in the Tricity—Splendor Gedanensis for 2013. By the end of November 2016 Tymendorf was awarded the prestigious Young Artist Award in Culture and the Audience Award by the Gdansk Municipal Council.
In 2016 he was invited together with such artists as Piotr Beczala, Jan Lisiecki, Adam Baldych and Lukasz Borowicz to support good music as the ambassador of the nationwide social campaign Save the Music. For more about the campaign, go to the following site: http://savethemusic.eu 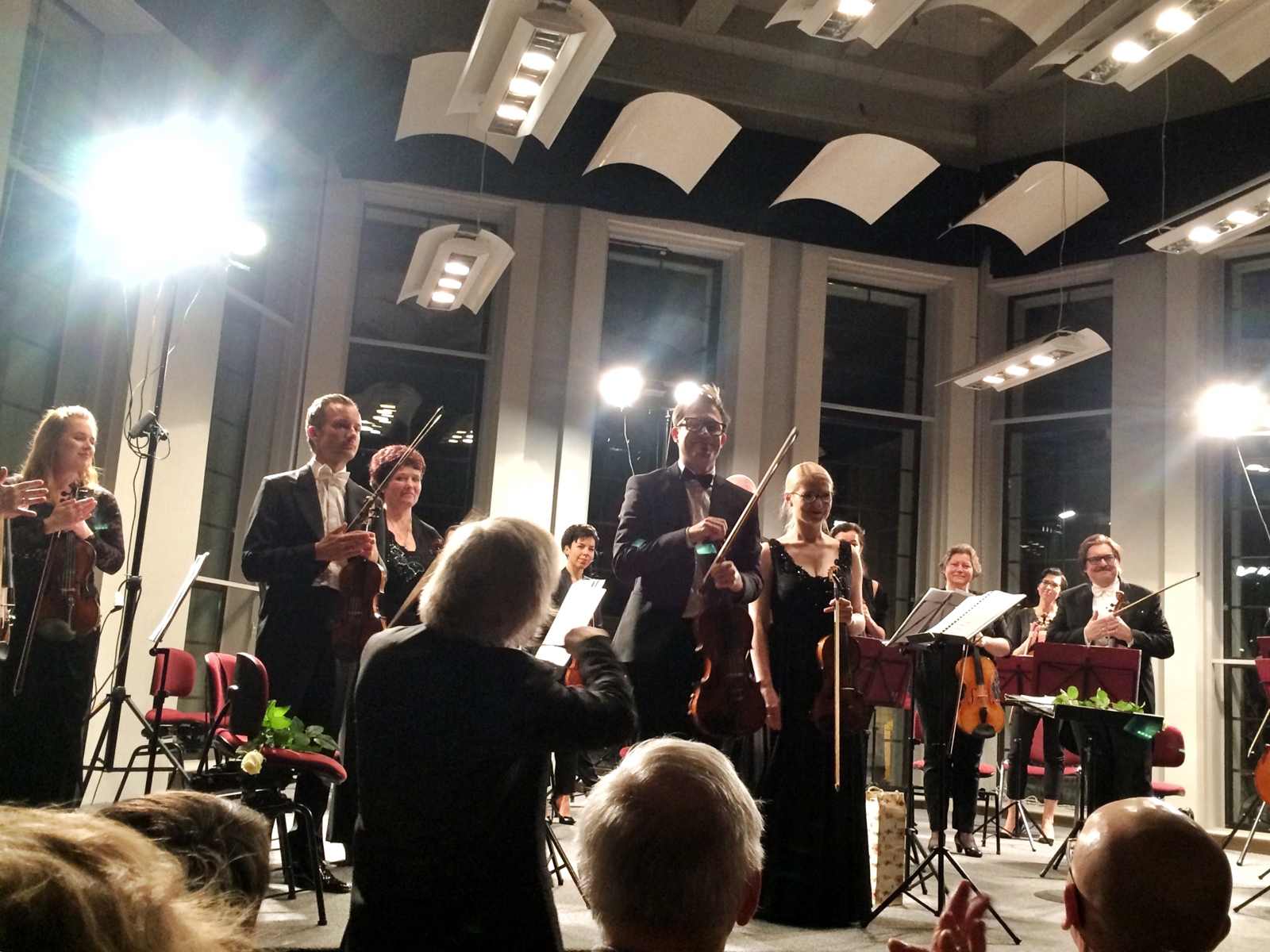 In 2017 he was awarded the Scholarship Program "Young Poland" from the Minister of Culture and National Heritage. Tymendorf as the only representative of music universities in Poland has won the 3-year scholarship program of the Minister of Science and Higher Education for outstanding young scientists in 2019, showing significant achievements in scientific activity.
He also received the Cultural Scholarship of the City of Gdask "Fund of Mobility". He received the title of Personality of Pomerania of the Year 2016 in the Culture category and Personality of Gdansk of the Year 2016 in the Culture category awarded by the Baltic Journal and Polska Press.
In 2017, the EURO Chamber Music Festival—directed by Krzysztof Komendarek-Tymendorf — was awarded the prestigious European Festival for Europe Label (EFFE) by the European Festival Association in Wiesbaden.
In October 2017 he received the honorary award "Merit for Polish Culture". From 2012 he has been viola academic pedagogue in the Academy of Music in Gdansk, and since 2015 he has run music workshops for violists and is a jury member of internationals music competitions.

Currently, he plays on a viola from the Polish violin maker Franciszek Borowiecki from 1934.

Krzysztof Tymendorf's passion is teaching the viola specialty as a Doctor at the Stanisław Moniuszko Academy of Music in Gdańsk, as well very much enjoys leading master courses, workshops, where he shares his experience in an open dialogue with his students.


The Stanisław Moniuszko Academy of Music in Gdansk

Since the winter semester 2012/2013 Krzysztof Tymendorf, at the age of 24, he started working at this university as Assistant Professor of Viola at the The Stanisław Moniuszko Academy of Music in Gdansk. In July 2018 he defended his doctoral dissertation.
Find further information on the Academy’s website: http://www.amuz.gda.pl

Through out around 5 years of teaching more than 15 students completed their viola studies with Krzysztof Tymendorf.
Some of them would like to introduce themselves. 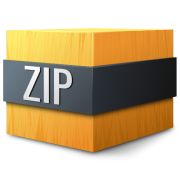 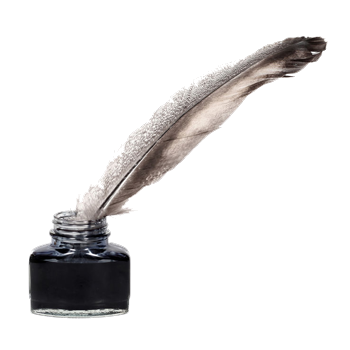